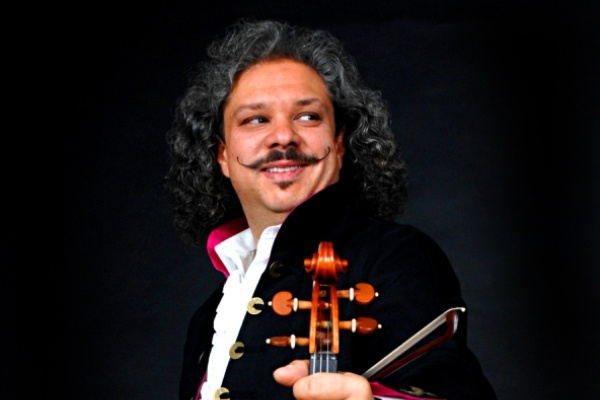 Bock: Fiddler on the Roof – Suite

Rimszkij-Korszakov: AFlight of the Bumblebee

There is nothing less surprising in the era of crossover and world music than the appearance of Roby Lakatos, the world-renowned jazz musician and his colleagues with our orchestra. The common divider of the two genres, jazz and classical music is folk music, which is the rich source for both.

Roby Lakatos was born in 1965 in Budapest as the descendant of the great gipsy violinist, János Bihari. Already at six he played the violin of the famous violinist on a concert commemorating Pista Dankó. When he was 18, he moved to Belgium with his gipsy band, where they played in a club in Brussels. His unique style, which took them later to America and to world fame was born out there as a special blend of gipsy music, jazz, and classical music. In this concert, Roby Lakatos is going to demonstrate that his artistic skills are deeply rooted in classical violin playing.

Among the symphonic compositions on the program there are several popular and well-known works. One is Brahms’ popular Hungarian Dances, which were greatly influenced by a collection of the then trendy verbunk-like dances from the 19th century Hungary Brahms received from his youth-time friend and partner in chamber music, Ede Reményi. Kodály, in contrast, wrote an opera titled Háry János from the best of folk songs he and his colleagues collected. The suite was written from the opera later. To make the concert truly a cavalcade of world music, the audience will yet hear Russian music and even a well-known work by the Argentinean Piazzola.